An Illustrated Lecture Given by Ted Coney 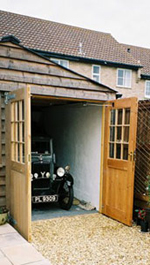 In the lecture, which lasts approximately one hour, Ted Coney uses slides of his work and short video clips to explain his ideas. His props include his 1931 Morris Minor, a box of very boring shells and the Phantom of the Opera.

Ted Coney is a painter who has been exploring family relationships through the language of objects, places, words and numbers for over fifty years.

His paintings deal with birth, death, marriage and divorce, to name but a few.

His work hovers between the figurative and the abstract and he also shows in his talk, how the works by other artists have inspired him and given him ideas.

Experiencing this lecture makes you realise just how much more there is out there, unseen by those of us with less perception

This second lecture by Ted Coney features three recent family paintings which, because they are small, can be displayed in the venue where the talk is taking place. Related objects that have inspired the paintings, will also be shown.

‘The Rashamon Effect’ deals with a love affair spanning sixty years and is seen through the eye of a grandmothers’ quizzer.

‘Forget-Me- Nots’ celebrates five sisters and deals with the importance of objects when trying to evoke memories and remember past times.

‘Dear Reginold Owen’ is the result of material found in the attic about 1930s Hollywood and has links to the film, Mary Poppins.

This talk is more suited to a smaller group of up to twelve people, so that the material can be seen, first hand.

If you would like to book either of Ted Coney’s lectures for your club or organisation, please contact him to discuss arrangements and fee.

The lecture can be seen as a stand alone event or as an introduction to a visit to the house.

The lecture can be booked even when the house is closed for the winter.

What a wealth of creativity and experience

I absolutely loved it! an experience to make one think

Fantastic, we'll be back!

As ever... and experience to inspire

Imaginative, fascinating and do well put together

Fascinating! - we will return

Clearly a very attractrive product which fitst perfectly in its surroungings